Mucopolysaccharidoses (MPS) are a group of rare genetic disorders characterized by a deficiency of lysosomal enzymes responsible for the normal degradation of glycosaminoglycans (GAGs) or mucopolysaccharides. The enzyme deficiency leads to progressive accumulation of GAGs in the lysosomes leading to the development of various somatic and neurologic symptoms. MPS are categorized into seven types (I, II, III, IV, VI, VII and IX) based on the enzyme affected. Inventiva believes that the mechanism of action and the ability of odiparcil (IVA336) to produce two forms of soluble GAGs (dermatan sulfates – DS; chondroitin sulfates – CS) makes it particularly suited to becoming the first GAG clearance therapy treating MPS I, II, IVA, VI and VII patients, where these types of GAGs accumulate. 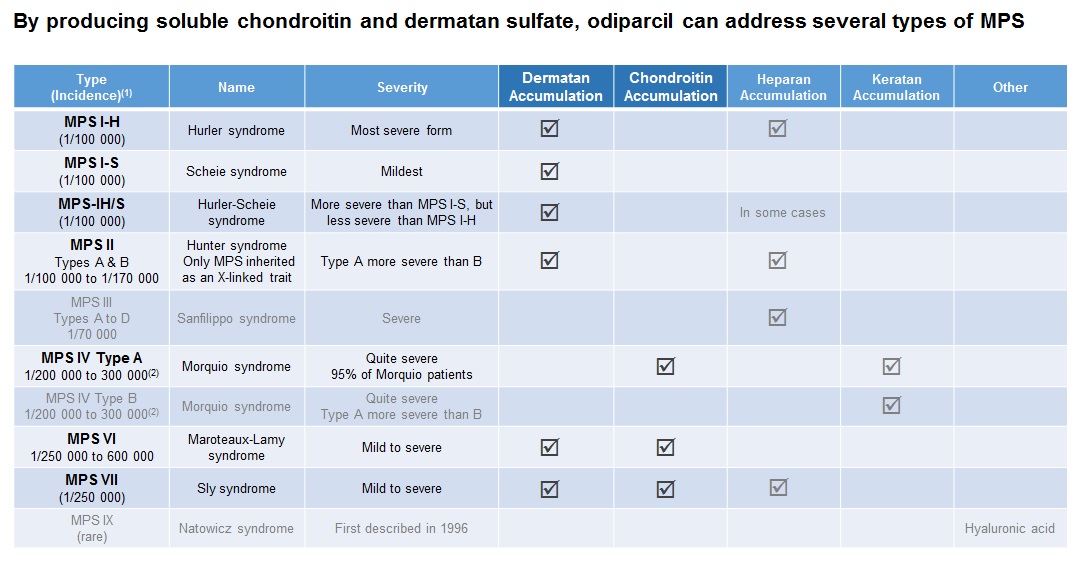 MPS I (Hurler, Scheie, Hurler-Scheie syndrome) is caused by a deficiency of a-L-iduronidase (IDUA), an enzyme required for the breakdown of GAGs, mainly heparan sulfate and dermatan sulfate. Clinical presentations of MPS I include coarse facial features, dysostosis multiplex, hepatosplenomegaly, cardiac disease and respiratory dysfunction. MPS I is further divided into three clinical subtypes: Hurler syndrome (MPS IH, severe), Hurler – Scheie syndrome (MPS IH/S, intermediate) and Scheie syndrome (MPS IS, attenuated; formerly known as MPS V). In each phenotype, considerable heterogeneity and overlap can be found with respect to the symptoms and their severity. Early progressive neurological decline is the hallmark of Hurler syndrome.

MPS II (Hunter syndrome) is caused by a deficiency of iduronate-2-sulfatase (I2S), leading to the accumulation of heparan sulfate and dermatan sulfate within the lysosome. Unlike all the other MPS that show autosomal recessive inheritance and appear only in individuals who have received two copies of an altered gene, one copy from each parent, MPS II is an X-linked condition. Therefore, it affects almost exclusively males. The clinical features of MPS II are similar to those of MPS I, ranging from attenuated to severe forms. Almost half of patients suffer from profound neurologic deficits, such as mental impairment, developmental delay and seizure.

MPS IV (Morquio syndrome), is subdivided into MPS IVA and B. Patients with subtype A and B have similar symptoms but the underlying genetic defect is different. In MPS IVA the missing enzyme is called N-acetylgalactosamine-6-sulfate sulfatase which is responsible for the catabolism of keratan sulfate (KS) and chondroitin sulfate (CS). The disease is progressive but the rate of progression varies greatly amongst affected individuals and life expectancy depends on the severity of the symptoms. Patients develop many skeletal abnormalities, resulting in a short stature, knock knees, and abnormalities of the ribs, chest, wrist, hips, and spine, which can lead to spinal cord compression, paralysis and even death. The patients’ joints are often hypermobile but some joints are restricted in their movements. Corneal clouding, hearing problems, heart valve abnormalities, respiratory problems including sleep apnea and other common problems observed in other MPS subtypes are also found in MPS IVA patients. Morquio A however does not affect intelligence.

In MPS VI (Maroteaux-Lamy syndrome), the deficiency of N-acetylgalactosamine 4-sulfatase (arylsulfatase B; ASB) leads to the accumulation of dermatan sulfate and chondroitin sulfate. Patients have coarse facial features, short stature, corneal clouding with visual impairment , hearing loss, dysostosis multiplex, hepatosplenomegaly, cardiac valve disease and reduced pulmonary function without intellectual deficit. As with other MPS, the time of onset, rate of progression and extent of the disease may vary between the affected individuals.

MPS VII (Sly syndrome) is a very rare form of MPS. Here the missing enzyme is beta-glucuronidase which causes chondroitin sulfate (CS) and dermatan sulfate (DS) and heparan sulfate (HS) to accumulate. Most organs and tissues are affected in MPS VII patients but symptoms severity vary greatly. Some babies develop a condition where excess fluid is build up in the body (hydrops fetalis) and are still born or die soon after birth. As with all MPS diseases skeletal abnormalities are observed. Sly patients have large heads and distinctive looking facial features, enlarged liver and spleen and heart valve abnormalities. Respiratory infection and sleep apnea as a result of the narrowing of the airways are observed as well as vision and hearing loss. Not all MPS VII patients have intellectual impairment.

Patient associations can be found in almost all countries where people are effected by MPS. A reference to national MPS societies can be found on the web site of the MPS Society (UK)